Ugh, I'm not sure how to begin explaining this since it's really just navel-gazing at the core, but the short of it is this: I like order, I like making mixes, I've titled some of my Inception fics based on songs, and I wanted to see how those songs might fit together.

As of today, I've got forty-six Inception fics up on the AO3 (the fuuuuuuck), fifteen of which are titled based on songs.

And verily, a mix--with a teaspoon of meta and a walk down memory lane--was born! 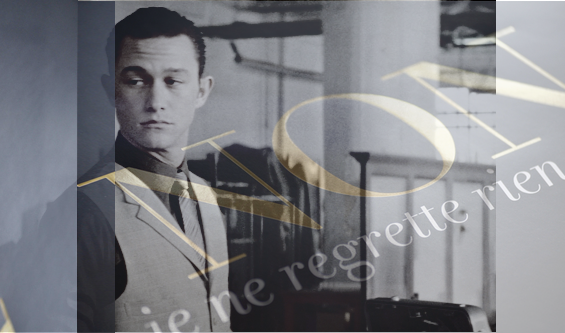 Finished my last grad school class, waiting for the grades to roll in or for the university to laugh in my face and make me do it all over again!

In the meantime, I'm doing a thing where all y'all can pick a number and I'll post an excerpt from the corresponding work in my WIP/stuff-that-I-will-never-actually-finish folder.

Give me a number 1-74 (either in a comment or on Tumblr is fine) and let's get cracking! Feel free to repost and let other people see what you've got in your own WIP folder.

Well, this was unexpected. Full disclosure: everything I know about James Bond comes from this movie, Wikipedia, and an ex who was a fan. Also, I'm kind of desperately craving some Séverine/Eve. POSSIBLE PROJECT SIGHTED.

Oh snap, is it Yuletide o'clock? I DO BELIEVE IT IS!

Brienne of Tarth has nothing to do with any of my requested fandoms, but she rocks my socks and did a stellar job of making this post less empty before I dumped some actual content in it.

Takes place between Atom to Atom, Pattern to Pattern and And Keep This Empire Alive, but can be read on its own. Contains mpreg, cross-dressing, and pregnancy sex.

Notes:: This is a shockingly belated contribution to Rena's Procreation Celebration and a belated addition to the Atom to Atom verse. I never intended to write more than one fic about Eames getting Arthur knocked up, but one turned into two, then it was brought to my attention that I'd managed to skip over the entire pregnancy stage in a verse centered on mpreg, and two turned into three. Oops.

Link: Bring All the Spaces Together

Trying to go a little easy on fandom in the meantime, since I've also moved and am working full time. The only thing I'm signing up for is Yuletide, unless I magically end up with enough free time and enough delusions of capability to decide I can crank out something else on any kind of schedule. That Teen Wolf cosmetology AU ain't gonna appear out of nowhere.

In lieu of actually posting fic, I guess I'll just tap dance or try and fool everyone into thinking I'm actually doing cool things. OH HEY, LOOK! It's this thing from Bina's kink fest that I never actually finished!

(It's the one where Eames forges a centaur. I couldn't go through with actually making Arthur fuck a horse. And some of the places my research took me were pretty weird. The things I do for fandom. If I were a Lannister, I would shove it out a window.)

Um, I also miss everyone and I'm sorry for not being more interesting. I've been more active on Twitter and Tumblr, since they take less energy and the future of this world is one of instant gratification and I am totally, unabashedly part of the problem. Call me maybe.

AND IF ANYONE ELSE THINKS THE CALL ME MAYBE MUSIC VID IS PRIME YULETIDE FANDOM FODDER, I WILL BAKE RAINBOW MUFFINS. AND TAP DANCE. AT THE SAME TIME.

Well, this was inevitable. TEENS, WOLVES, AND CASSEROLES. NOTHING TO SEE HERE.

Notes:: Contains spoilers for the season two finale. I don't know why I decided Stiles needed to be smothered in casseroles, but he just does.

Things I have done over the past month and a half:

-- interviewed at a zillion different schools
-- taught summer school (today was the last day!)
-- signed up for the last two classes I need in order to get my master's
-- landed a job for fall
-- started looking around for housing closer to said job
-- written stuff

Title: A Fake Handshake Don't Make No Man
Fandom: Inception
Rating: NC-17
Pairing: Arthur/Eames
Disclaimer: Don't own 'em, making no profit off 'em, etc.
Word Count: 26,000
Summary: Spaghetti's straight until you heat it up. Or, how Arthur learned not to use pasta as a pickup line and Eames learned to enjoy long walks on the Kinsey scale.

i_reversebang as a companion piece to this lovely artwork by

i_reversebang as a companion piece to this lovely artwork by

Better late than never, so here's the rest of my Con.txt weekend.

So I got there too late for the Avengers panel, which was just as well because it sounds like it consisted of a ton of squeeing and flailing and I just don't think I could have handled that for an hour. I'll be honest, I saw the film and enjoyed it, but I wouldn't have considered delving into the fandom if the enthusiasm wasn't as contagious and overwhelming as it is.

This probably qualifies as a classic case of Migratory Slash Fandom, but I don't see any issue with going where the enthusiasm is. I've learned a lot about the Avengers I never would have cared to learn about otherwise and it's been pretty enlightening, though I don't see it becoming my one and only fandom love by any means. Comics fandoms unnerve me a little since I've never had any interest in comics, but messing around with movieverse alone seems off somehow, like I'm not a real fan or something (uh, this applies to me only, because I'm awesome at holding double standards like that; I judge no one who writes exclusively movieverse fic, and actually prefer it for reading material since I don't feel like I'm missing tons of convoluted canon backstory)

And now I want modern-day hijinks and Steve taking Thor to Brooks Brothers because he knows that store, damn it and together they make the entire menswear floor swoon.

My dreams are very small. ♥

One more to go!